On November 23, HAM put into operation a liquefied natural gas (LNG) mobile unit that will supply natural gas in the Port of Vigo, to feed an electric generator that will provide electricity to ro-ro vessels within the CORE LNGas Hive project, financed by the European Union through the CEF funds (Connecting Europe Facility), led by Puertos del Estado and coordinated by ENAGAS. This project to supply electricity to ships is one of the four projects of the Port of Barcelona, ​​encompassed within a larger project, with the participation of most of the ports in Spain, which participate in different innovation projects with the aim of reducing greenhouse gas emissions.

The mobile unit has been designed, built and commissioned by the HAM Group. One of the challenges of this project has been to integrate the LNG storage, gasification and regulation facility into a 40-foot maritime container, guaranteeing the same benefits as any other terrestrial installation. This project will allow the Port of Vigo to reduce atmospheric emissions during the stay of ships in the port. It guarantees more sustainable traffic and respectful of the environment, not forgetting that economically they will also be more advantageous, since the mobile unit allows the reduction of emissions generated by ships when electricity is self-generated and liquefied natural gas has a lower cost.

The inauguration of the mobile unit in the Port of Vigo was made possible thanks to the “Crecimiento Azul” strategy of the Port of Vigo, which is part of the Core LNGas hive Project, in which the ports of Tenerife and Barcelona also participate. This project, financed by the European Union through the funds "Connecting Europe Facility" (CEF) and led by the Ports of the State, coordinated through Enagas, was launched in 2014 and has a budget that exceeds the 2,200,000 euros. Its objective is the reduction of emissions from ships during the period that are in the port, thanks to the development of an integrated, safe and efficient logistics chain that uses liquefied natural gas (LNG) as fuel in transport, especially maritime, in the Iberic Peninsule.

The presentation brought together in the Port of Vigo the Conselleira do Mar, Rosa Quintana; the President of the Port Authority of Vigo, Enrique César López Veiga; the Director of the office of Vapores Suardiaz -signatory agent of the Suardiaz Group-, Romina Fernández; the Director of the Department of Energy and Planning of the Enerxético Institute of Galicia (INEGA), Emeritus Freire; the head of the Infrastructure Technology Department of State Ports, José Damián Maldonado; and the Managing Director of Enagás Emprende and project coordinator, Fernando Impuesto; among others.

Albert Casasin, on behalf of the Engineering Department of Grupo HAM, was in charge of explaining to the attendees the basic characteristics of the container, as well as its operation. The start-up of this mobile unit will allow a reduction of up to 85% in the levels of nitrous oxides, as well as eliminating all sulfur particles and oxides.

The Core LNGas hive project, put into operation, last year, a mobile unit to supply gas in the Port of Barcelona to an electric generator, to feed the moored ships. The project will continue in the following months in the port of Tenerife with the presence of HAM.

Other news from Group HAM that may interest you 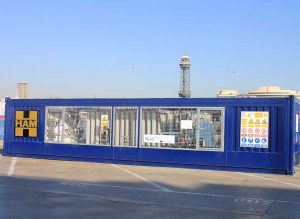 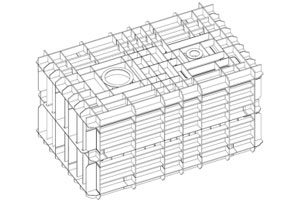 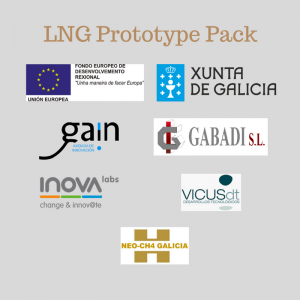