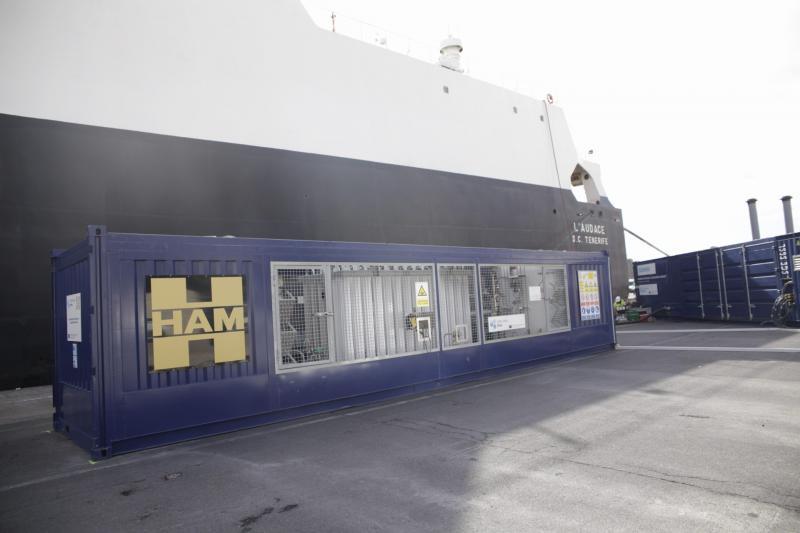 HAM Group has participated in the third pilot test within the Core LNGas Hive project, this time in the Canary Islands. The main objective is the supply of electrical energy, from an engine powered by LNG, to ships in the port. This initiative of the Port of Tenerife, framed in the CORE LNGas Hive project, is funded by the EU through CEF (Connecting Europe Facility) funds, led by State Ports and coordinated by ENAGAS. The project, to supply electricity to ships moored at the port, aims to develop an integrated, safe and efficient logistics chain for the supply of liquefied natural gas as a fuel in the transport sector, especially maritime, which will also reduce greenhouse gas emissions.

During the pilot test, the mobile unit of HAM Group, with an engine powered by liquefied natural gas, will supply electricity to a ship of the Suardíaz shipping company. This action, successfully implemented, previously, in the Ports of Barcelona and Vigo, will reduce the levels of nitrous oxides emissions by 85%, as well as the elimination of all sulfur oxides and particles generated by ships when they generate their own electricity when they are moored at the port facilities.

HAM has been responsible for the design, construction and commissioning of the mobile unit that will supply liquefied natural gas to an electric generator, which in turn is responsible for providing power to moored ships. The LNG plant, consisting of 2 tanks of liquefied natural gas, responsible for storage and gasification, is located within a 40-foot maritime container, which can be easily loaded and unloaded to be able to transport it. Container mobility is very important, since the CORE LNGas Hive project is divided into three geographical areas: Barcelona, Tenerife and Vigo. The equipment is disassembled and transported without difficulty, allowing it to be quickly put into operation at its next destination.

During the presentation, Toni Murugó, managing director of HAM Group, together with Albert Casasin, project manager, explained the basic characteristics of the container and its operation. Other attendees of the event have been Carlos Gónzalez, president of the Port Authority of Santa Cruz de Tenerife, Magec Montesdeoca, corporate director of Puertos del Estado, Gertu Bidegai, representative of Siemens and Juan Riva, president of the Suardíaz shipping company, among other guests.

Currently HAM Group is a leader in the integral service of LNG and CNG, in mobile-vehicular environments, industries, maritime ... having become a benchmark for the rest of companies in the sector that are committed to liquefied natural gas and compressed natural gas as an alternative to fossil fuels.