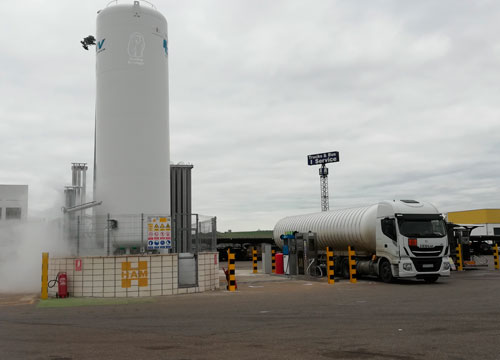 HAM has opened the first gas station in the Autonomous Community of Extremadura, located in Merida, at exit 341 of the A-5 or Southwest motorway, also known as the Extremadura highway, one of the six radial highways that can be found in Spain.

This new service station has a great strategic importance in the national geography, since it will allow to refuel compressed natural gas (CNG) and liquefied natural gas (LNG) to all those vehicles that make the route between Madrid and Lisbon, the capital of Portugal. In addition, the route of the A-5 unites the autonomous communities of Madrid, Castilla-La Mancha and Extremadura. It should also be noted that the gas station is on the vertical axis that represents the A66, which runs from north to south of Extremadura, and that links Seville with Oviedo.

After being one of the first companies to provide LNG for industrial use in Extremadura, HAM considers the vehicular gas sector in this autonomous community as a future commitment. First we installed a mobile LNG unit and now we open the first fixed station of CNG and LNG.

The new service station opened by HAM makes available to all users a double compressed natural gas (CNG) pump, for light vehicles and trucks, and a double liquefied natural gas (LNG) pump for trucks. innovative dual-fuel system of LNG and CNG, designed and manufactured by HAM, allows two vehicles to be refueled at the same time in a single pump.

This natural gas supply station, with which Mérida will count, will be open 24 hours a day, 365 days a year, allowing customers to access the supply with the HAM card for professionals and with any credit card.

With the opening of the first gas station in Extremadura, in Mérida, HAM currently has 30 stations in the national territory and the rest of Europe. This confirms the commitment to compressed natural gas (CNG) and liquefied natural gas (LNG) as an alternative, efficient, clean and sustainable fuel that minimizes the negative impact on the environment, reducing the emission of nitrous oxides, fine particles and sulfur oxides, which affect air quality. In addition, the use of natural gas as fuel, allows savings between 30-50%, with respect to the use of fossil fuels derived from oil, which have a higher rate of contamination.

At HAM we work every day to strengthen the network of CNG and LNG service stations. We are currently studying various projects that will allow us to open new refueling points for compressed natural gas and liquefied natural gas in various parts of the Spanish and European geography.